The Islands of Anarchy Series 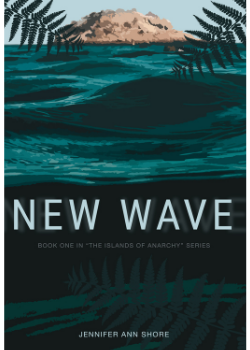 When seventeen-year-old Mol is caught committing a crime, she kicks and screams her way into a dull existence of servitude in the Authority, the suffocating patriarchal regime that oversees The Network of Islands. Her penance makes her restless, and she soon finds an outlet to direct her attention — the young Commander who is at the root of her unhappiness.

Mol thought she was done fighting. After the disappearance of the General and the discovery of the map that led to an unknown future, she wanted to leave the islands and her pocketknife behind. But with the Authority disbanded, the future of the Network weighs heavily on her injured shoulder, and she’s stuck navigating mind games, complex relationships, and the pieces of a broken system.

REVIEW IT ON: BookBub | Goodreads

Writer Shelagh Dolan: "For me, personally, it was so refreshing to see a female protagonist in an action and adventure story like this... New Wave is a strong debut from a first-time author. It held my attention until the very end and I’m already looking forward to diving back into Book Two."

The Uncorked Librarian: "Most notably, New Wave gives us a brand new female heroine. One who is strong and kickass but also flawed and working on herself. Mol is neither dainty nor helpless. Beautiful and aware, she builds relationships, falters, and learns how to fight like a warrior with her words and weapons. Fearless, she leads an army for a greater cause, even taking a bullet.  Nothing can stop her.  Although Mol also falls in love, her love is not blinding. Mol never loses conviction, herself, her beliefs, or her family for a man.  She is cautious and brave. You go, girl."

Sisters With A Booktique: “New Wave” is a great book for fans of alternative dystopian, science fiction, action, drama and romance. I spent a good deal of time trying to piece together motives and connections and, like any good novel in a series, was left wanting to read the next one.

TheGirlOnTheGo: "Mol is one hell of a heroine. She’s like that tiny streak of a sapling growing out of the cracks in pure concrete and finally breaking it entirely. I don’t know if I ever admired any female protagonist as much as her after Diana from Wonder Woman. Only that, Mol’s fully human."

BittyBookNook: If you're a fan of young adult dystopian fiction with strong female leads, then New Wave should certainly be added to your summer reading list--especially if you're vacationing on an island somewhere this season!

N. N. Light Reviews New Wave: "If you're a fan of young adult dystopian fiction with strong female leads, then New Wave should certainly be added to your summer reading list--especially if you're vacationing on an island somewhere this season!"

Want updates on new releases and promotions directly to your inbox?

Get on the list for Jennifer Ann Shore's bimonthly newsletter.